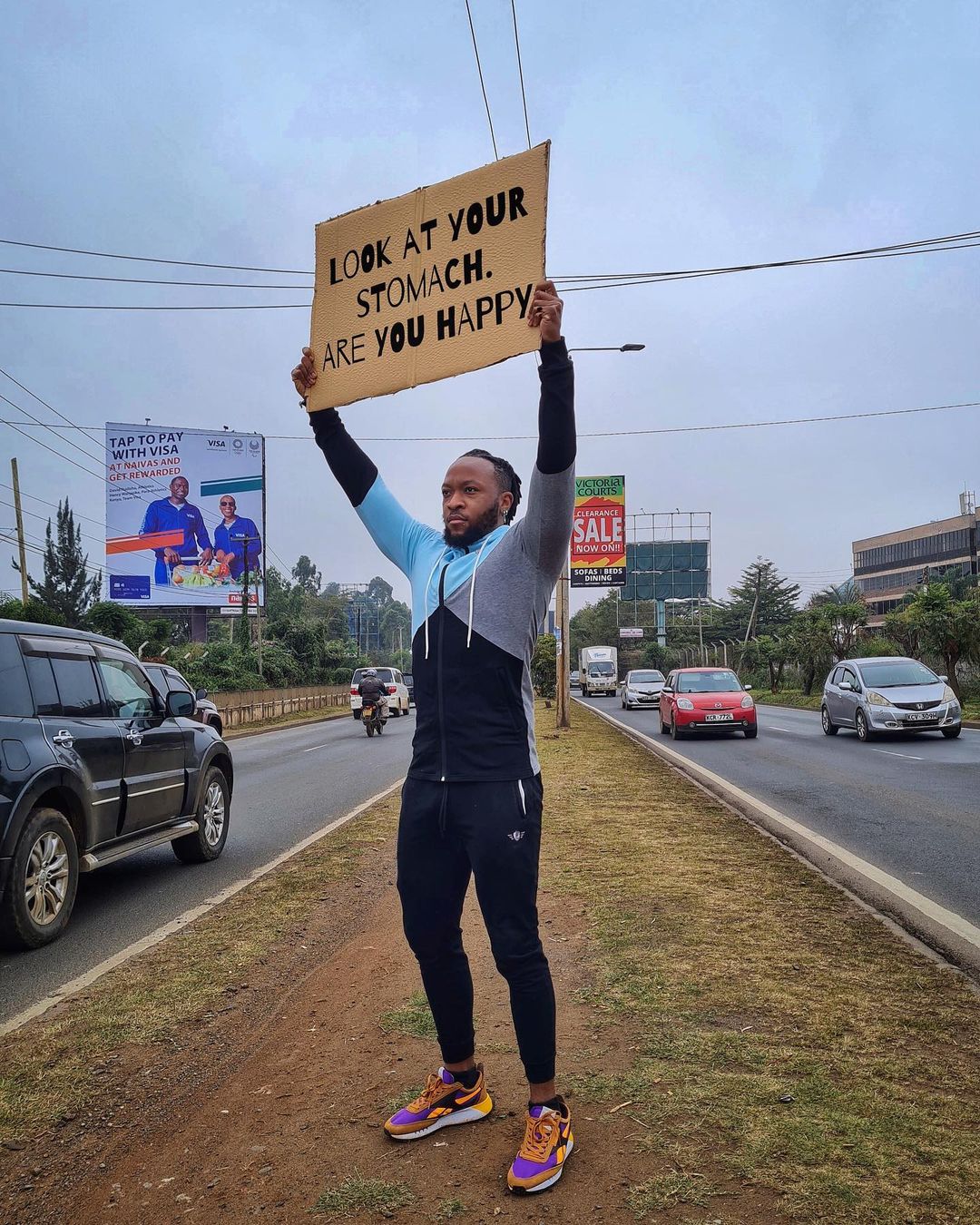 A few months ago, fitness coach and social media personality Frankie JustGymIt decided to touch a section of Nairobians where they hate being touched—Their potbellies. And he did it in what many saw as the most brutal and insensitive manner to talk about other people’s bodies.

Well, he trended on social media and probably achieved his mission of getting into people’s nerves to spark a conversation with themselves and maybe turn around their poor eating and lifestyle habits.

He also succeeded in poking the right crowd whose main agenda in social media is to scroll endlessly looking for anyone willing or unwilling to have virtual stones thrown at them.

I may not know if Frankie’s peculiar advertising strategy actually converted into clients but one thing I know is that his message was spot on.

He stood in the middle of a busy road during rush hour and held up the said insensitive poster for all the road users to see.

The poster simply said “look at your stomach. Are you happy?”

Now, I am assuming that those who were happy with their stomachs drove on, while the rest started to froth in the mouth and quickly reached for the only weapon they use to fight celebrities. The internet.

As the debate raged on Instagram and Twitter, I was just amazed at how much people hate the truth out here.

Everyone was so engrossed in the poster to an extend Frankie had to do several follow-up interviews and posts to explain what was already captioned in that post.

“I’m just saying. We’ve got meal plans and workout programs going for 70% from today up until Monday! Swipe to see the details. Let’s burn that tummy!”

I don’t see anything in this statement that doesn’t make sense even if you decide to read it backwards or whatever.

You only get irked with such statements if all you think about a fit body is the physical aspect of it.

Yes, the physical body shape may be a reflection of fitness to a layman but to nutritionists, fitness is more than just that flat tummy.

I think Frankie just used the stomach as a symbol that everyone can relate to in a more acceptable way.

Anyway, the point is, people need to prioritize exercising especially if all you do is wake up, get in your car, sit in traffic, sit on your desk all day, back in the car, take beer and nyama choma in the evening, sleep and wake up the next day to repeat the cycle.

It could sound difficult to squeeze in some minutes into your schedule for exercise but trust me, it is only difficult because you haven’t tried hard enough.

I know some people will say it is expensive and blablablah but then again, sorry to burst your bubble that you are living in a country where healthy food is way much cheaper and available than you may want to imagine.

We are in a continent where we are surrounded by a lot of low-calorie foods (https://agrofoodious.com/are-pickles-zero-calorie-or-negative-calorie-foods-explained/) but we choose to let our noses and taste buds dictate our meal choice when walking down the streets littered with chicken and chips.

We do this damage to ourselves and then blame Frankie for touching our stomachs with his meal plans and weights.

If your plan is to live a long healthy life like the Japanese, then you should be looking at your stomach as Frankie says instead of tweeting on the sofa or at the bar counter.