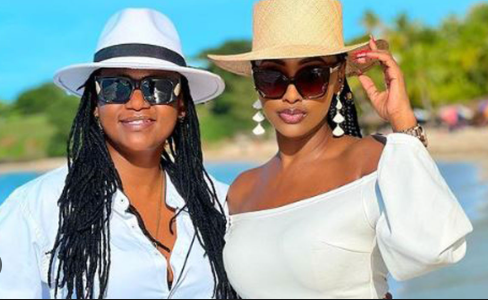 Marini Naturals CEO Michelle Ntalami has been on the spotlight recently after she was spotted having a ‘cosy’ time with musician Fena Gitu.

Their photos while they were on ‘baecation’ elicited mixed reactions from fans; who believed it was the genesis of a new relationship.

We’re well aware that Michelle Ntalami is a rainbow member for quite some time. Her previous relationship with Makena Njeri ended in a cul de sac as Ntalami cited ‘serial cheating’ as their main reason for break-up.

Eventually, Ntalami decided to pave way for Makena to roll with anyone they would please; as she embarked on finding a replacement.

Read also;Maureen Waititu is back to advertising her availability After their exquisite photos together, it’s needless to say that the two have had a palpable relationship between them; probably more than just friendship. Bear in mind that Ntalami is a member of the LGBTQ community. Fena is not an exception. In a recent interview, Michelle calibrated that she and Fena are ‘just friends’, something which is hard to believe to be honest.

Maybe their photos was an orchestrated plan to tickle fans to talk. Which they did successfully. But what if they’re just lovers in denial.

For now, the two remain unassailable as we dig deeper into their relationship.