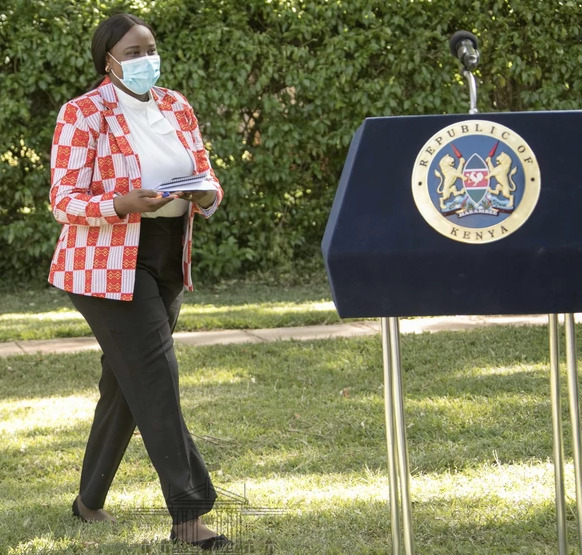 State House Spokesperson Kanze Dena on Friday became a trending topic after she appeared on camera for the first time in months after she reportedly gave birth.

Media Personality Muthoni Wamukiri and singer Wahu are just but a few of the women who have come out to strongly defend the State House Spokesperson after she was body-shamed by Kenyans on Twitter (KOT).

Muthoni Mukiri added that body-shaming is illiterate and it needs to stop.

“Stop Body Shaming. It is shallow and illiterate…Aki Surely…”

Wahu also noted that it was unfortunate to see women speaking badly against another woman. She also added that Kanze had just given birth and it needs to stop as quickly as possible.

“Such a shame to see people, more so women body shaming a woman especially after she’s just given birth… We can do better guys… let’s be better.”

State House Spokesperson Kanze Dena-Mararo on Friday became a trending topic after she appeared on camera for the first time in months after she reportedly gave birth.

Comedian Terence Creative also defended Kanze and added that both him and his wife experience body shaming everyday.

Kenyans online immediately noted that her appearance had changed significantly during the time she was away from the public.

Most of the comments were about her physical appearance, with netizens speaking unfavorably about her weight gain. Other media personalities and internet users also expressed their disappointment with the body shaming.

I honestly don’t think it’s right to body shame a woman who has just given birth, especially by her fellow women who should be the ones supporting her.