Why Being Bahati is about Being Diana

Being Bahati or what…

After 9 months on air, Being Bahati  a Kenyan reality show that airs on Ntv  has gained its viewership from the look of trends on social media.The show was to prominently feature Bahati’s love life, general celebrity status, his wife Diana Marua and his two daughters Mueni and Heaven.

For sometime  you would think that the show producer changed tide after episode two of the show  from ‘Being Bahati  to Being Diana .’ Why? The show now tends to focus more on Diana Marua  than Bahati. By that, the show  started with Diana Marua- Bahati’s wife and the surprise baby shower.That is beside the issue.

Most of the sequel  episodes in the show continue  showing us irrelevant things  like what Diana did to Bahati, what she did not do, what salon she went to,what hair she did, who she went out with,who she disagreed with,what she cooked  and so on.

Before long, you get to social media and see Diana trending on various pages , a good example was after  she kicked out three house helps in a month – well she had her reasons. But how can  someone be distasteful of people in such a short while?

Basically,Diana being in that show is what sets the agenda of discussion to the viewer.

After  a while  we are told about  her buying  Bahati a car for his birthday not just  any car a range Rover-Goals huh?

Don’t forget she was the one being given a house as an apology after the two had broken up few days before . This happened when  Diana claimed that Bahati had  neglected  them with  the ‘excuse’ of working.Lame excuse I would say.

Unfortunately,  Bahati is shown either on phone  or on talking heads to the viewer. This, to explain what happens. His activity in the show is not clearly put out like that of Diana. He is more of a supporting cast more an extra in the show. 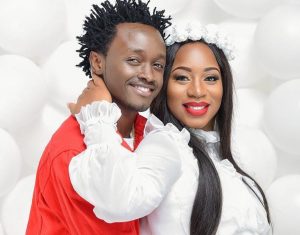 Other things that popped out in the show that were off were when  in  the last episode we are being told of Diana having a ‘girls day out’.I mean was that necessary to a viewer?What point was being driven from that? Ex-talks? Men talks? Fine, I think that should have been kept in the wraps!

Nobody wants to know what Bahati’s wife’s friends love lives were like or should be!Makes sense? Had to make that sink in.

Mr. Seed, one of the once EMB records signed artist left and opened his own studio Starborn Empire after an alleged fall out with Bahati because of disagreements between their wives.Still on Diana! But that is a story for another day.

We can’t deny there is good camerawork and editing.

However the whole concept of ‘Being Bahati ‘ is not fully considered not unless Bahati’s  celebrity Status was the only factor.

For relevance and impact, the show’s producer should take a another approach to make the show about Bahati if not change it to ‘Being Diana’.

It doesn’t make sense to have a show that says different thing to what it is expected to.