The new beef in town is between Boniface Mwangi and Ezekiel Mutua. The moral cop clashed with Boniface after the activist cast aspersions on his IQ.

Ezekiel Mutua is one of the most hated persons in Kenya. The Kenya Film and Classification Board (KFCB) chairman has been attacked by so many people.

Boniface ruffled Mutua’s features when he stated that the KFCB boss lacked a sense of judgment. The activist called Mutua outright stupid.

You can’t even win MCA seat

The moral cop immediately fired back at Boniface. He says the controversial activist is thinking like a toddler that why he can’t even win MCA seat.

“Your infantile thinking and juvenile delinquency is the reason you couldn’t win an MCA seat. Useless activism!” Ezekiel Mutua tweeted. 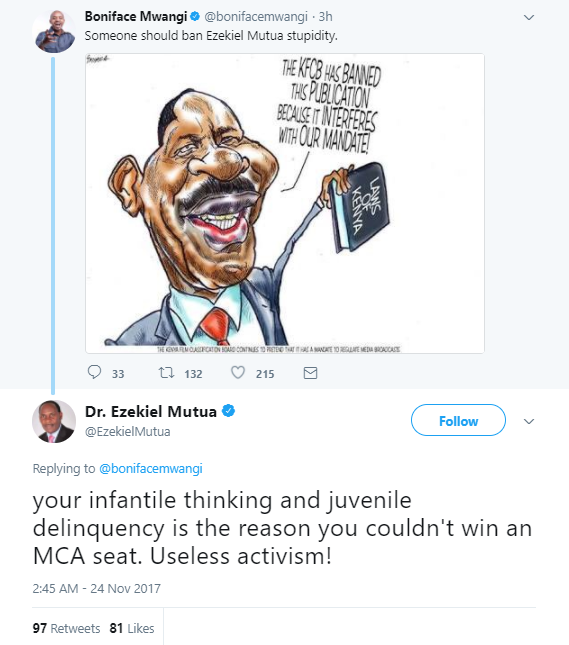 The KFCB boss however knew he couldn’t stand the heat from Boniface. He chose the block the activist instead of putting up with his insults.

Boniface sensationally claims Ezekiel Mutua is a thief. The activist reveals this in his response to Mutua’s earlier tweet.

“So @EzekielMutua you blocked me but l will still keep reminding you that you’re a thief,you stole TV’s,cash and switched the winners list at Kenya Union of Journalism awards in 2005. Have you told your followers your greed killed KUJ?” Boniface Mwangi tweeted. 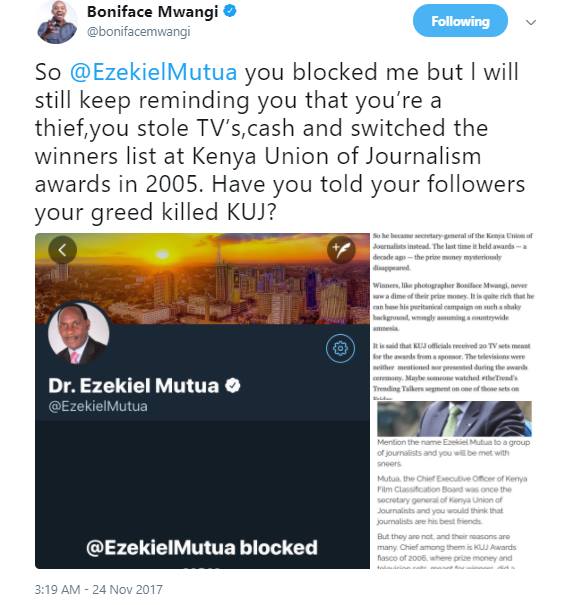