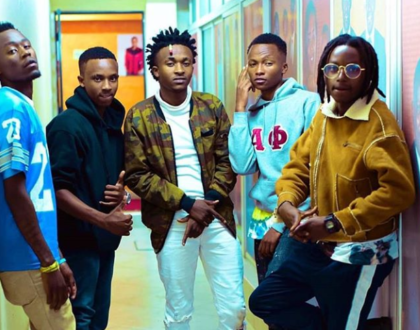 One of gengetone music genre pioneers Sailors Gang have gone MIA for quite a long time after making a bit of a fortune from their music a few years ago. They had a tumultuous time after drama befell them following their fall-out with Mwalimu Rachel.

A lot was said about their split, and rumour had it that each of them decided to go their separate ways after all the drama that followed.  One of their members, Lexxy Yung parted ways with the Gengetone group to become a gospel singer. An emotional Yung revealed that he had decided to quit with the popular Gengetone group to pursue his solo music career.

That being said, Sailors are no longer producing music. And according to Qoqosjuma, it’s mainly because of corruption both in government and poor leadership in record labels. The musician was in sombre as he disclosed how they were undermined during their shining days as Sailors group; stating that they could no longer continue after seeing all that was happening to them.

Eventually, they had to split up and try to make a living as separate artists. But Qoqosjuma maintains they’re still good friends.