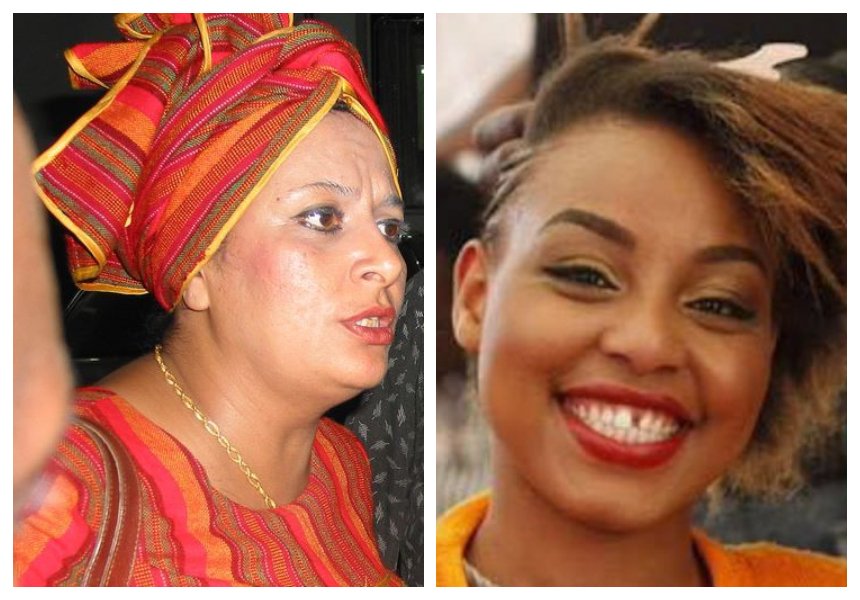 Former presidential candidate Nazlin Umar has come all guns blazing to condemn all those calling for leniency in Ruth Kamande sentencing.

Ruth was sentenced to death after she was found guilty of stabbing her boyfriend Farid Mohamed 25 times. High Court Judge Jessie Lesiit determined that Kamande was an unremorseful cold-blooded killer after he heard that she ignored Farid’s cries for help and deliberately blocked his exit from the house, even as neighbours gathered and urged her to stop and open the door.

Politicians like Millie Odhiambo and organizations like Amnesty and KNCHR have called on judiciary to scrap Ruth’s death sentence.

Nazlin Umar insists that Ruth is a psycho butcher who doesn’t deserve a speck of pity. The former presidential candidate insists that Ruth forced herself to Farid, stalked him and brutally killed him when she learnt the deceased had love letters from high school.

Nazlin further says the court established Ruth made up claim that Farid was HIV positive just to seek pity. The psycho butcher claimed that she had a fight with Farid after she discovered that he was HIV positive and wanted to infect her.

Facts. Enough drama. I thought it was necessary to bring to the public domain the “hidden” truth that the media, Amnesty and KNCHR are not discussing but sensationalist for the butchers freedom from the hangman. Lets scrutinise the facts in court which they are not telling you.

#Kamande committed a grisly murder. Transcripts from the judgment state that she stabbed Farid Mohamed *25* times, with intervals, leading to his death.

*Post mortem reports proves farid was not HIV positive* *as she feigns this claim* . This is a fake excuse the butcher created *one year after being in prison.* She was forcing herself on him, to move in.

He had left her, for good cause now we can agree, and moved on.

Mohammed’s uncle Edward Gatonye told the court he had to go look for Farid personally at his house after being unable to get him on phone and met them both there.

*Only to be told by Farid that Ruth had blocked* numbers on his phone.

*Farid told his uncle he didn’t want the relationship but she was forcing herself on him and couldn’t be stopped, she refused to leave.*

Ruth was openly hostile to the uncle at his attempt to intervene and locked herself in the bedroom, came out to buy chips, only served Farid and herself then locked herself up again.

*Ruth was not only forcing but isolating Farid.*

Farid’s sister Serah waithera testified that Ruth would go to her work place to insist she was Farids girlfriend refusing to accept that he didn’t want her. She refused to listen to Serah to let go. Serah testified it was a one way relationship, *Ruth was stalking her brother* .

Farid even avoided her by shifting to a new residence but she *stalked* him.

After finding the old letters, *Ruth bolted the metal door from inside and stabbed him from behind as he was working on his laptop and pierced his heart.* Then went on and on, taking her time torturing him in between stabs ignoring his pleas and screams, even while the neighbours were screaming from the window where they could clearly see it all.

The Judge noted ‘# *Ruth ignored #Farid’s cries for help and deliberately blocked his exit from the house* , even as neighbours gathered and urged her to stop and open the door* .”

“ *The accused inflicted each stab* , *not* in a frenzy as she alleged in her defence, but *deliberately* and *intermittently* . Her action was *calculated* to inflict pain and cause death *slowly* but *assuredly* . That is clear proof of *malice* , of *spite* , *callousness* and *hatred* ,” Justice Jessie Lessit said in her judgement.

”She stabbed the deceased *25* times, and *not* in quick succession, but rather *spaced it out ** , as if savouring it in pleasure* ….She showed *no remorse* during proceedings… she *did not* plead anger nor hurt while killing Farid…. ” Lady Justice Lessit.

But biased, discriminatory, religious bigots, lopsided lost sheep Amnesty and our own most incompetent KNHCR say the sentence against the psycho butcher is unfair, Irreversible and disproportionate, supporting the *grisly murder* as though Farids killing was not.

The butcher deserves 25 death sentences as every plunge of her knife was deep and meant to kill.

Now, whoever thinks this evil, malicious butcher should be freed should volunteer to take the butchering psychopath into their homes, ndiyo mujue hamjui.

So no drama ati oooh blah blah. Just one question. Who volunteers to take this court certified killer psycho home? Who goes first? Show by hands??