10 Dangerous Misleading Myths About Pope’s Plane ‘Shepherd One’. Everyone Has Fallen For Number 8 (Photos) 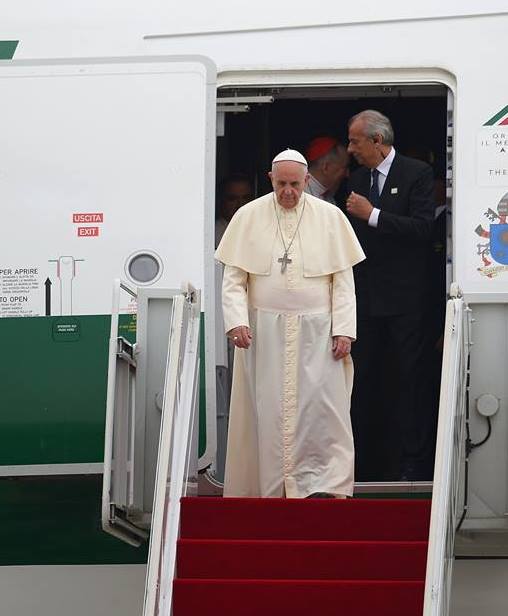 The head of Catholic Church is only a day away before he lands in Kenya for a three day official visit. Pope Francis will touch down at JKIA on board a plane that is full of misconceptions about it.

Below Are 10 myths about Pope’s plane.

1. ‘Shepherd One’ Is A Symbol Of Roman Catholic Church

Yes the moment the plane touches down at any international airport it flies to, the Vatican flag and the host country’s flag are flown just like any presidential jet.

But the plane Isn’t a symbol of the Vatican so there is no radio call name given to the plane carrying the Pope like how Air Force One is treated when it touches down at any airport.

2. ‘Shepherd One’ Has A Twin On Standby For Emergency

The Pope travels with a single plane and in case it breaks down, then the team responsible for his movement will have to scavenge for another plane to ferry him wherever he is to go.

3. ‘Shepherd One’ Is A Mobile Bunker Offering Pope Safe Fleet On Earth

The Papal plane hasn’t been built with special features that enable it to perform functions as a mobile bunker and keep the Pope safe from aerial and ground attacks.

‘Shepherd One isn’t really a fast and high flying bird like Obama’s Air Force One.

5. ‘Shepherd One’ Is Custom Designed For The Pope

Not true, not at all. One would imagine the Pope’s plane has conference rooms, large round tables and Presidential suit.

But this is not the case, the Papal jet maintains the typical layout of ordinary commercial planes, economy class and business class.

6. Even The Smallest Details Of ‘Shepherd One’ Are Kept A Secret From Everyone

The Vatican isn’t paranoid about ‘Shepherd One’ like America’s Secret Service. Unlike Air Force One where journalist are restricted from moving about in the plane, ‘Shepherd One’ has no secrets that need to be kept away from curious members of the fourth estate.

7. ‘Shepherd One’ Is Capable Of Flying Half Way Around The world

The Vatican has no financial might to purchase tanker aircraft to refuel ‘Shepherd One’ and keep it in air for the longest time possible.

If there is need to refuel, ‘Shepherd One’ has to go down and do it the conventional way.

8. The Vatican Owns ‘Shepherd One’

Now this is the biggest fallacy of all time. The Vatican DOESN’T own any plane, so is the Pope. The Catholic Church charters a plane, usually Alitalia, to fly the Pope for his foreign trips.

The Chartered aircrafts are usually regular commercial planes that are owned by different air companies.

The tradition is for the pope to take the Italian national airline, Alitalia, to wherever he’s going, and then fly the national carrier of that country on his return.

You don’t ‘overprotect’ a plane you don’t own. ‘Shepherd One’ isn’t accorded crazy security details like what we saw when Air Force One when it touched down at JKIA.

10. The plane Is Called ‘Shepherd One’

Did you know it’s Americans who baptized the plane carrying the Pope ‘Shepherd One’? Well, their very own presidential jet is called ‘Air Force One’ so they thought since the Pope is a shepherd leading the Catholic Church, his plane should be called ‘Shepherd One’.

Even the term ‘Papal plane’ is just a myth since the Pope does not have his own personal aircraft.