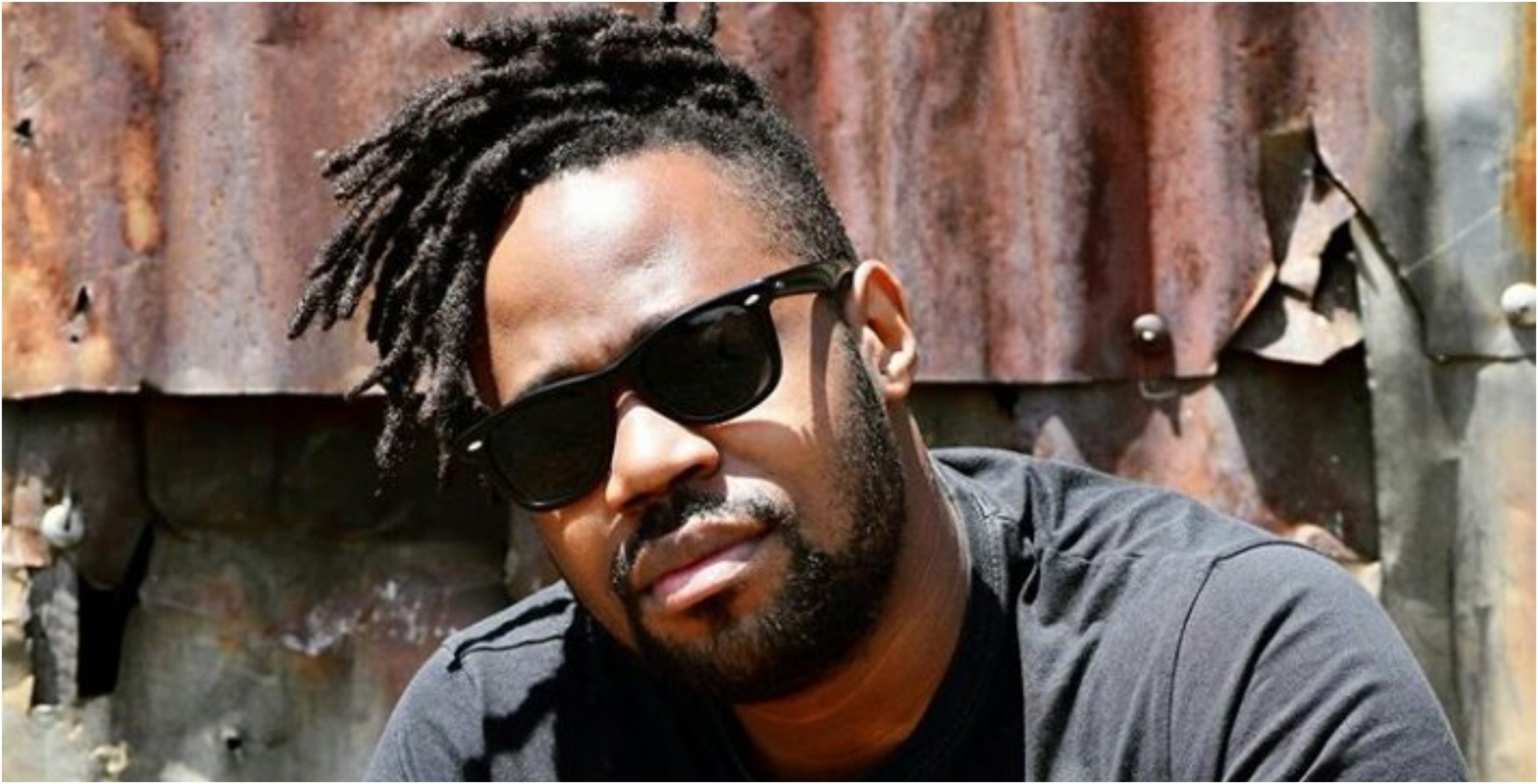 Out-spoken female vlogger, Mkamburi Chigogo is on an angry rant after a giveaway promotion in Kenya worked against her, leaving her counting losses.

According to her, the giveaway effortlessly worked for them in the USA, only for it to turn sour among Kenyan netizens.

The issue was, the offer was labelled ´giveaway´ so this meant people had a chance to win without giving money. But unfortunately, it turned out to be a ´raffle´ which simply meant you give in money but remain a gamble on whether it would get it back or lose altogether. 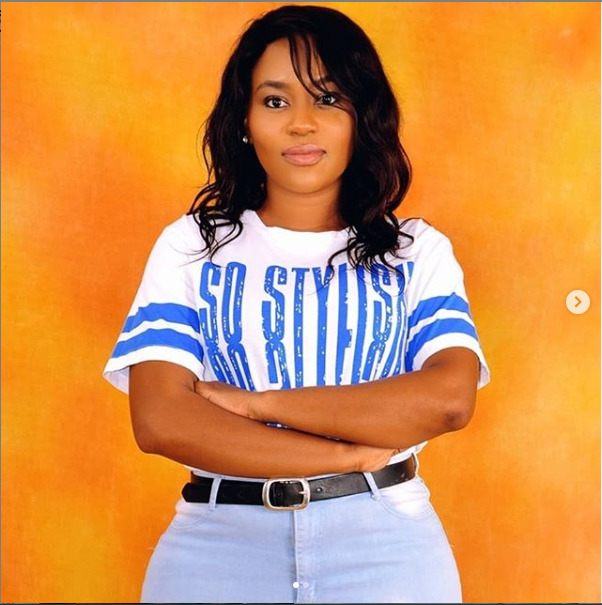 The offer on the table was giving a chance to Kenyans especially females to bag themselves quality wigs up to 8 pieces based on your number of entries that went for KSh 500 each.

Kenyans who took part in the deal felt cheated and ripped off by the opinionated feminist and her counterparts whom they believe were out to mint money from poor Kenyans. 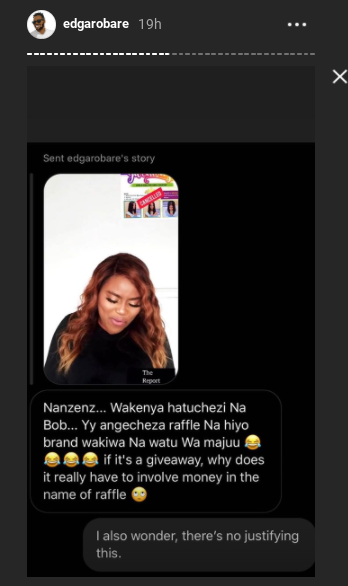 This saw her give Kenyans a long lecture online, bashing them for defaming Havilah Crowns brand that was forced to cancel the raffle.

THE RAFFLE / GIVEAWAY WAS/IS CANCELLED. . . THIS IS FOR ANYONE WHO FELT PRESSED AND ANYONE WHO FELT AS IF "THEIR MONEY" WAS GOING TO BE TAKEN FROM THEM FOR WHATEVER REASONS. AFTER RECEIVING UNWARRANTED BACKLASH THAT WAS ACCOMPANIED WITH BRAND DEFAMING NAME CALLING @havilahcrowns CANCELLED THE ACTIVATION AND CASH WAS REIMBURSED TO EVERYONE WHO HAD PARTICIPATED . . IF YOU SEND YOUR KSHS.500 AND IT WASN'T REFUNDED TO YOU PLEASE COMMENT DOWN BELOW. . . . IF YOU WERE ON THE FORE FRONT LABELLING /DEFAMING THE BRAND OWNER AND ACCUSING HER OF FRAUD /SCAM/CONNING THEN EQUALLY JUMP ON THE COMMENT SECTION AND PRODUCE EVIDENCE OF WHERE/HOW SHE OR I HAVE EVER DEFRAUDED/CONNED/SCAMMED ANY OF YOU. I'M WAITING… . . . *DON'T COMMENT WITH A PSEUDO AND BE READY TO DEFEND YOUR TRUTH IF AND WHEN YOU HAVE ACTUAL EVIDENCE TO PROVE THAT YOU'VE EVER BEING DEFRAUDED. . . . WE APPRECIATE ALL THOSE WHO PARTICIPATED IN THE RAFFLE AND WE APOLOGIZE FOR ANY INCONVENIENCE CAUSED. . . . @havilahcrowns IS A CREDIBLE BRAND AND THEY HAVE BUILD THEIR BRAND BASED OFF HARD WORK HONESTY AND TRANSPARENCY. AND IF ANYONE HAS EVIDENCE STATING OTHERWISE COME FORTH AND FEEL FREE TO PRODUCE IT. . . . @havilahcrowns

Unfortunately, Kenyans were not going to table her yelling, clapping back at her for always poking her nose in other people´s affairs but when it is her turn to get exposed, she balloons up.

Comedian and hypeman, MC Eddie took her on commenting: 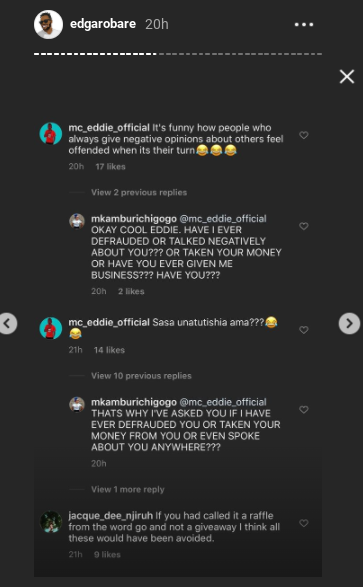 Kenyans shamelessly celebrated her loss and the cancellation that forced the company to refund everyone to their last bob, which they believe is the reason why Mkamburi is mad.

Plus, it seems the vlogger and her counterparts realized they might not get what they wanted from Kenyans, therefore hiding under the umbrella of ´cyber-bullying´.

A section was quick to remind the radio personality of the Laws governing Instagram and the illegalities of giving money for giveaways on the platform. 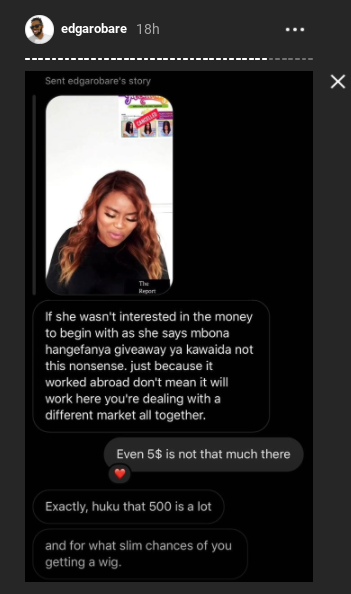 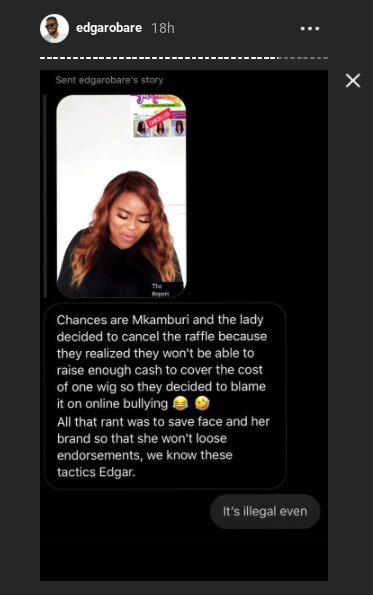 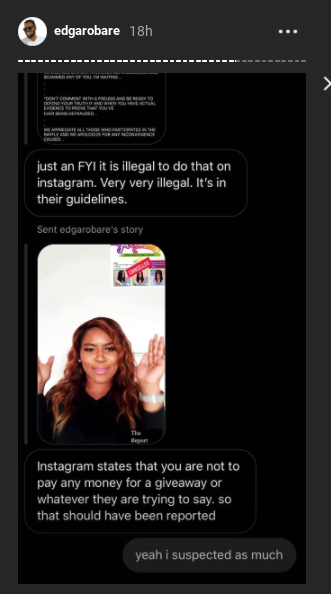 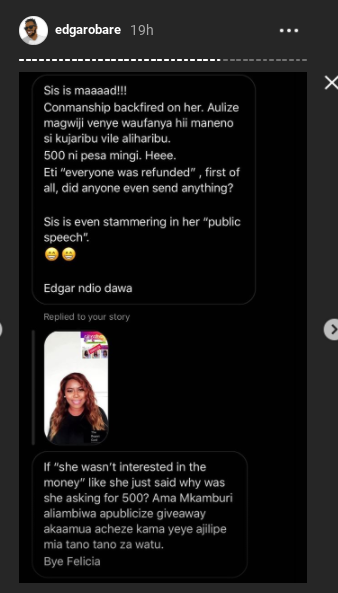 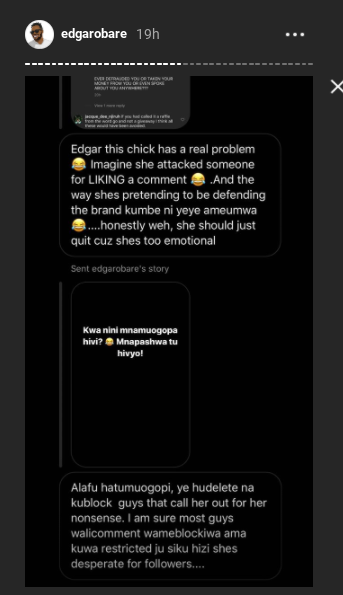 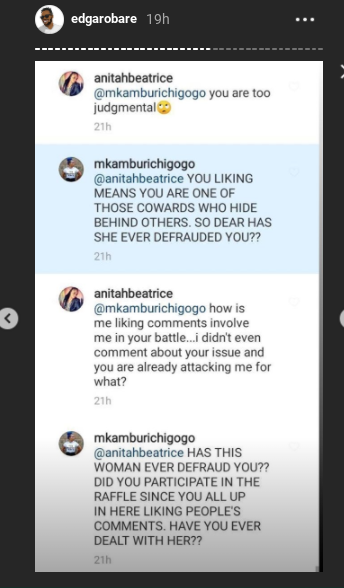 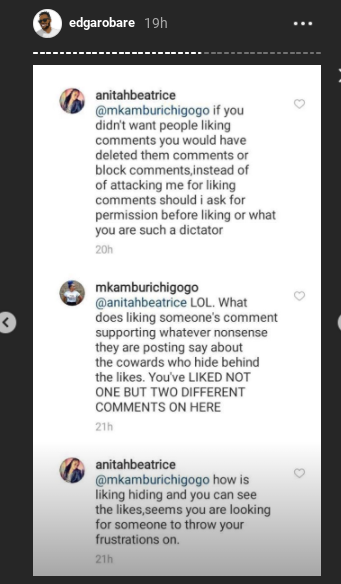 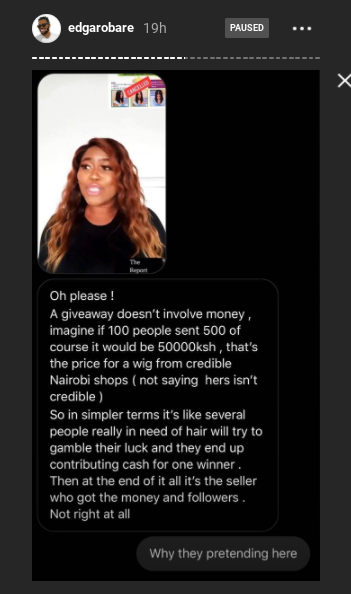 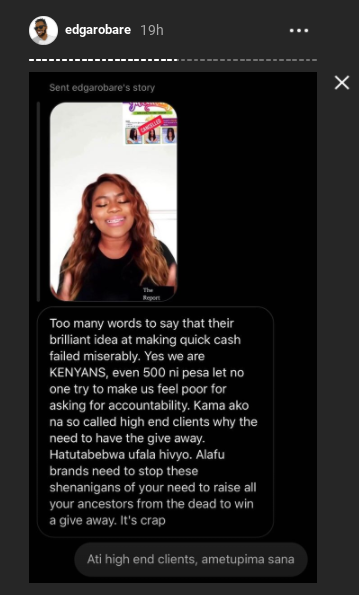