Kenya inamambo! Flight canceled after plane gets stuck in a pothole on the runway 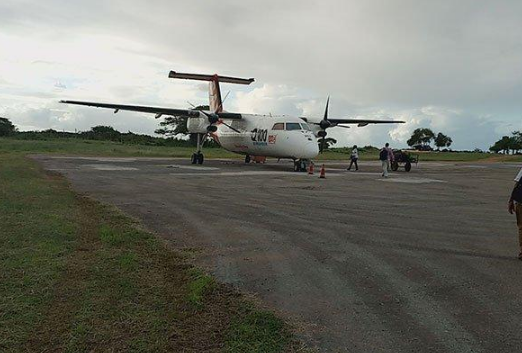 What are the odds of a runway having a pothole and an airplane getting stuck in there?

This actually happened. A Fly540 pilot was forced to abort take-off after realizing one of the plane’s tyre was stuck in a pothole on the runway at the Manda Airport in Lamu.

The plane, which was heading to Nairobi on Sunday had 33 passengers on board but couldn’t move past the hole. Engineers and other airports, staff were called and had to dig the plane’s left tyre out of the pothole using shovels and jembes.

“The plane was about to take off but it was a bit difficult. The pilot had to stop abruptly especially after realising that one of the plane’s tyres was stuck in a huge pothole on the runway. Engineers and airport staff had to be called and assisted in pushing the plane out and parked it at a safer location on the runway from where it was finally able to take-off safely,” an official conveyed.

“According to a witness who was on the plane, everything was okay until they hit the deep hole. “The issue came just seconds as the plane started to lift its wings in readiness to fly. We saw the tyre on the left side stuck inside a huge hole on the runway. We thank God that the pilot acted swiftly and switched off the engine of the plane. It was a scary moment,” Omar Mahmoud said