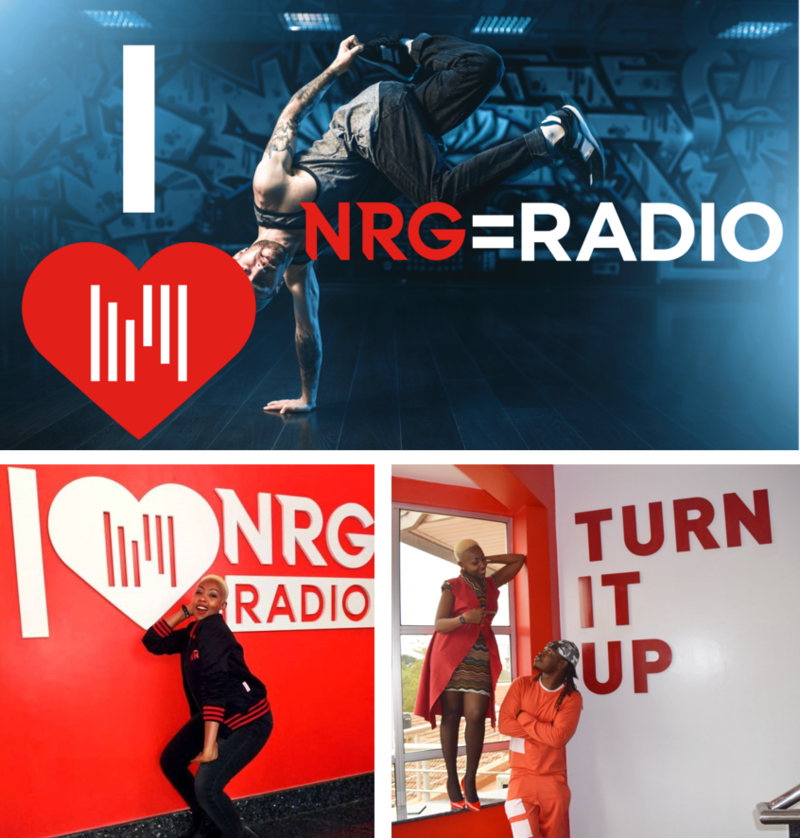 Right from institutions re-branding, to memes created in recognition of the athletic icon. To state commendations that are a first of its kind, Kipchoge EGH carried the day.

Unfortunately, little did a couple think of the end effects of their actions. What about the Law?

Local Kenyan station, NRG radio decided to re-brand to Kipchoge radio to celebrate the icon for an exemplary job done.

Just soon after, they got slapped with a law suit. This would see them grace the walls of court due to infringement of image rights and reputation of the marathoner.

That was not just it.

They would additionally face legal charges for attempting to gain 1 Million followers in exchange of handing Kipchoge a second-hand BMW ride. 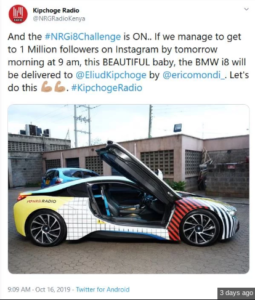 However, Kipchoge´s lawyers were observing from a distance, pouncing just when the time was right.

Friday, the 18th of October 2019, the retired Kenyan field athlete threatened to sue NRG radio for using his name without his consent.

We have been retained by Eliud Kipchoge, our client to write to you. hat you issued a press release indicating your said intention to appropriate our client’s name and images on your various FunX Radio 91.3FM, NRG Radio 97.1FM and Choice Radio 87.7FM.

Because according to his lawyer, Donald Kipkorir, Kipchoge never asked for any gifts.

That without his permission, authority or licence, or any colour of right, you changed the name of your station topline on your social media pages and online blogs to Kipchoge.Radio and [email protected] That without our client’s permission, authority or licence or any other colour of right, you frequently informed your listeners and followers that by following your Instagram page, you will gift our client a car. Our client never asked for and doesn’t require any gifting of your car of any other car.

Therefore, their demands were that within 2 hours, the local station should make a public apology and expunge his name and images in any of their promotions.

That the use of our client’s name, image and reputation was in total and blatant violations of his brand rights, privacy, copyright and trade mark rights. These rights are in personam and can only be transferred with our client’s permission. On receipt of the above action and response, we shall enter into a discussion on the quantum payable for the aforesaid egregious violations. That if we do not receive your action and response within (2) hours of us emailing you this letter and also by posting us on the undersigned twitter timeline, we will proceed appropriately to enforce our client’s rights. that your action violates the Communication law of Kenya, and also attract criminal liability.

Failure to which, they would be forced to settle for an amount payable for the violations.

Seems like the local station realized they had crossed the line on this and took nothing to chance.

Minutes after being served with the statement from the KTK advocates – Kipchoge´s lawyer – NRG had met the demands set.

In a skeptical ´later deleted´ tweet by NRG radio, their response reads:

Senior Counsel @DonaldBKipkorir our response to your demand on twitter on behalf of our Listeners, Fans and Friends will be revealed in under 1:59:40 [Kipchoge´s INEOS record]. 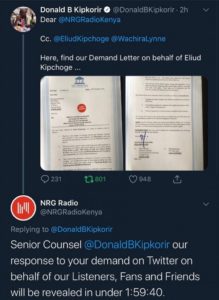