Like most celebrities, Timmy Tdat has had his portion of struggles over the years before becoming famous. Born in a family of eight siblings, Timmy’s early life was not a bed of roses. Timmy’s rise started around 2012 after he was introduced to Naiboi (then called Rapdamu) by his cousin. When he got into the industry, there were well-established artistes, one of them being Kenrazy.

After his father’s demise, Timmy moved in with his sister at Kasabuni in Baba Dogo, a slum in Nairobi.

With an aim to inspire his fans, he has shared a throwback photo of himself before he started music. 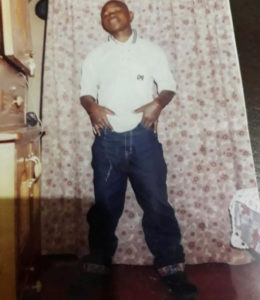 During his earlier life, he did several weird jobs. He was a garbage collector. The singer also tried selling women’s clothing before eventually becoming a matatu tout at Baba Dogo.

The singer’s passion for music began at an early age. He even went ahead to sell electronics in his house to fund his music videos, which didn’t do well at that time. However, in 2014, he made his breakthrough after releasing ‘Welle Welle’ featuring Naiboi.

Timmy, who also doubles as a radio presenter is currently one of the most popular artistes in Kenya, commanding a huge fan base among the youth.

This is truly inspirational. It’s encouraging to most upcoming artists who are thinking of giving up. Don’t give up just yet!