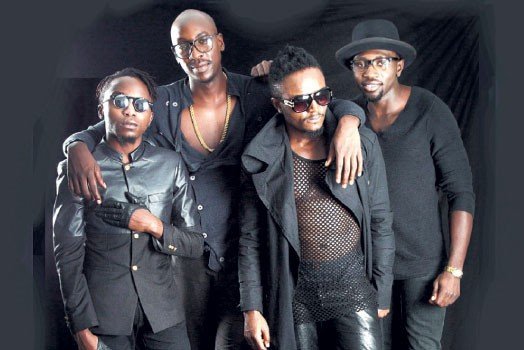 With increasing COVID-19 cases reported in the country by the day, artistes have had to cancel live performances and any tours previously scheduled.

Not just that, live concerts on YouTube are proving difficult for artistes as well, with Kenya’s boy band, Sauti Sol having to cancel one that was scheduled for end of March.

The band’s UK tour on the 28th of March was called off following the global pandemic but they hoped to have a live concert go down via YouTube, as a compensation but it might not go as planned.

Following the cancellation of our UK tour date at Jazz Cafe on the 28th, we were optimistic that we could stream to you a live concert on YouTube to make up for the disappointment. 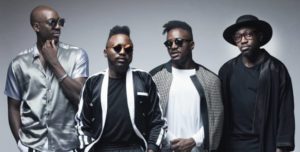 The music group cites the alarming rising cases of Coronavirus patients in the country as an impediment to their plans.

Unfortunately with the rising cases of COVID-19, we must CANCEL the Youtube concert scheduled for this Saturday, March 28th. 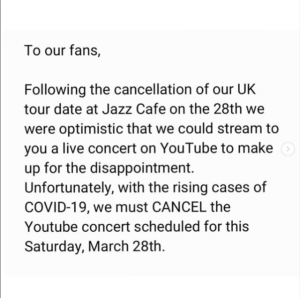 We have to prioritize the urgent need for our band, friends, families and team’s safety. Streaming a full live performance requires a sizable crew, band and team members to pull it off. It would be so irresponsible of us to risk their lives and those of their families. We must look out for each other in this unprecedented time. 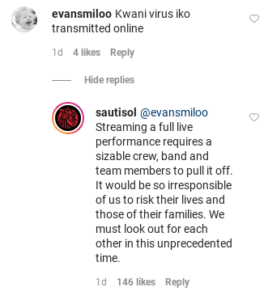 However, in place of a cancelled live concert, Sauti Sol announced they will be releasing the second single of their upcoming album dubbed ‘MidnightTrain’ as of Friday, the 3rd of April.

But hey, we still love you and we wanna make your lockdown and isolation worthwhile by dropping the second single off our upcoming album #MidnightTrain, next Friday, April 3rd. Tell a friend 🙌🔥#StayHome #LockDownNow #TogetherAtHome 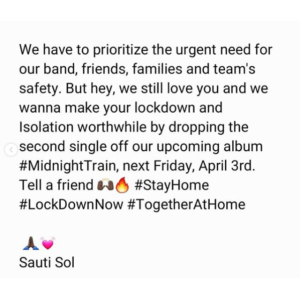 Fans welcomed the news with mixed feelings, some understand the logic behind the cancellations, others still disappointed by the move.

bichanga_ Quite a Logical decision

nelius_njoroge We were okay with the makeshift band on Sunday 😭. But yeah ….let’s flatten the curve .

ellen.sida I love you pple