What more can you ask for when a friend decides it is time you also lived a life worthy of everyday´s challenges? The Bahatis surprised Denno with his own brand new Nissan march.

Gospel artist, Denno was away from the music scenes for quite sometime and none of us had a hint of his whereabouts.

Until The Bahatis paid them a visit and we could tell all is not well. Bahati revealed that the ¨Mbona¨ singer was struggling to make ends meet especially in music production expenses. 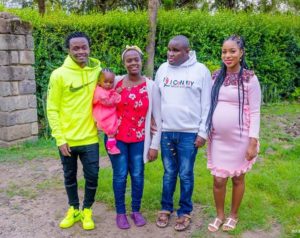 The Bahatis and Denno with his wife and daughter, previously

Kenyans challenged Bahati to step up and do more for the gospel singer, if at all he cared. Sure enough, he stepped up.

First, he brought him back to our screens after their recent collabo, ¨Bado¨ where Denno believes it is not yet time to give up.

So now, after opening up on the challenges he has especially for transport, Denno has now received a brand new Nissan march from the EMB President to solve the problem.

Through an Instagram video, that showed the happening of events, Diana and Bahati drive off to Denno´s place without the knowledge of Denno, neither his wife.

They go in as surprise guests. Then out they walk to the car, with Denno´s wife blindfolded and she is taken aback the minute she is told the car in front of her is now theirs. 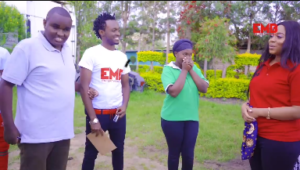 Denno is handed the car´s logbook and asked to put it in his name because the car is a gift from The Bahatis. 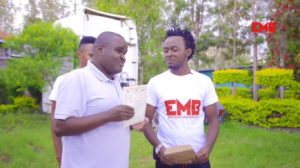 Overwhelmed, tears flowing, emotions rising, thoughts racing, hearts beating…it is just too much for the couple to take in.

Weezdom joined in the entourage and holds Denno closely, as he tries to compose himself from the elation. 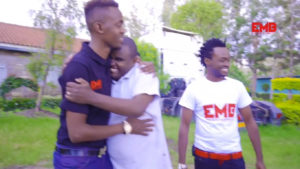 An overwhelmed Denno holds onto Weezdom

He is still in shock and goes ahead to physically touch it and even sit in it. 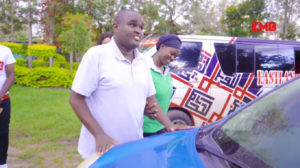 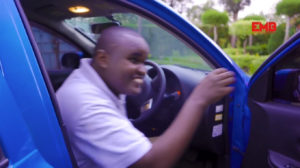 Denno in his new Nissan march

Bahati´s words to Denno are:

A tearful Denno then expresses: 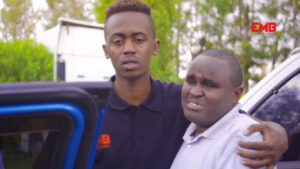 Weezdom and Denno get emotional during the event

The tear-jacking event was a sure blessing to Denno and his family, from the EMB family. Check out photos below. 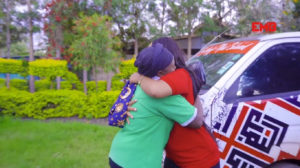 Denno´s wife and Diana embrace each other 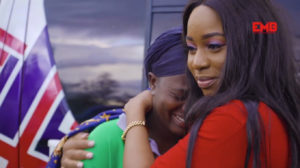 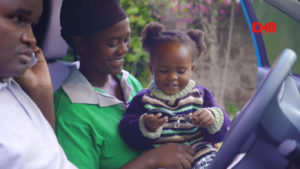 Denno with his wife and daughter in their new car 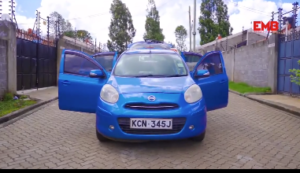 The Bahatis´ surprise gift to Denno and his wife, a Nissan March

TEARS AS #DENNO RECEIVES HIS FIRST CAR EVER 😢😢😢 Since Last Weeks Episode of #BahatiReality I have had sleepless Nights Thinking of how @DENNOMUSIC has had embarrassing Moments in Matatus Because Since his First hit Song his Life has never Transformed. But No matter the F****s I go through after helping different Artists God has still given me a Burden to Make Sure I don't Stop Until the African Child is Inspired. And Today I Cannot Believe that @DENNOMUSIC Dream of Owning a Car has Come True. Thank you to all My Fans for Supporting and Believing in Me since Day One. Because of Your Love and Support I'm able to Support others. And to Every One that has Taken my Burden to see #DENNO'S Life Change GOD WILL REPAY YOU🙏🙏🙏 (I'll Post & Talk about You Tomorrow)… Lakini Kwa Sasa @DENNOMUSIC Congratulations on your New Car go Change that Log book to Your Name CHAP CHAP!!! And Just to Let you know!!! As Long as God Is still Keeping Me On TOP!! I Bahati Will Support Your Music and Stand with You Until your Great Musical Gift Reaches all Conners of this Earth. TO GOD BE THE GLORY #IamShaddingTearsOfJoy 😢😢😢