The online war between Amber Ray and Jimal’s first wife Amira is still on the loose as more and more people give their opinion on who’s right and who’s not. Is Jimal enjoying all this drama? Well, he still remains silent and doesn’t seem to be bothered much.

Their beef has led to an alleged series of exposés, which we didn’t know before. To begin with, Amber Ray disclosed that Amira had gone to Dubai to ‘sleep around’ when his husband wasn’t well off. The claims weren’t justified as Amira unleashed photos while she was together with her hubby in Dubai. Additionally, Amber insinuated Amira is irresponsible as she claimed she had abandoned her kids to go to Dubai.

Some of Amber’s claims have led to people terming her as a homewrecker. This time, curvy socialite Bridget Achieng has come in defense of Amira. Bridget terms marrying your neighbor’s husband as unfair and wrong.

On an Instagram Q&A with her fans, she was asked to give her view on the online mischief between the two co-wifes. She wrote;

”@Being_Amira can never do wrong in my eyes and that’s on Mary had a little lamb… Wewe ukichukuliwa bwana utafurahia?? The audacity of marrying your neighbor’s husband nkt… That alone is wrong on every level.” 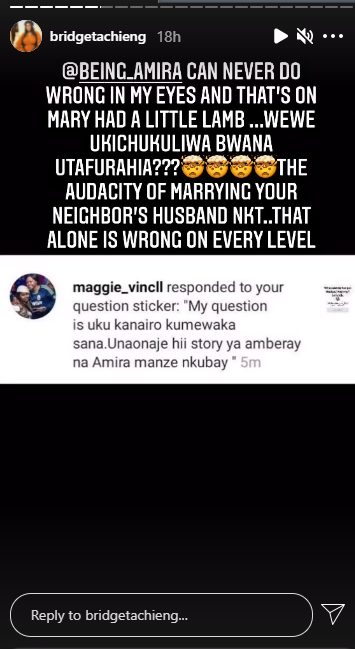 Co-wives should be living together in harmony, and someone needs to stop this between the two. And that someone is Jimal!