Be warned! Yummy Mummy gets a lass, red-handed ogling at her hubby

It is tough when a woman realizes that there is a lady or ladies hitting on her man. It gets worse, when the lady actually disguises herself as a concerned and pleasant individual only to realize she is but a ´snake´.

Kenyan vlogger, Joan Munyi better known as Yummy Mummy spat venom on a follower who had always claimed to be looking up to her as an inspiration.

Yes, that sailed through until recently when the expectant personality was browsing lightly through her hubby´s DM only to be caught by surprise. 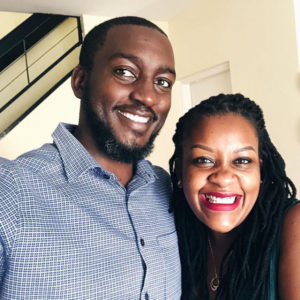 So apparently, this lady who disguised herself as a ´follower who looks up to Joan´, had been chatting her husband all this while.

It´s obvious she took a closer look at the chat and all the while, the lady had been ´throwing herself at Joan´s man´. 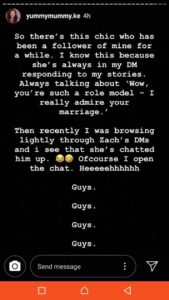 Oh you travel a lot yeah? I don´t mind keeping you company on a trip one of these days.

If you ever need someone to be open with, I can make the time. 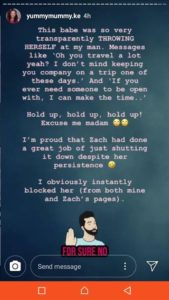 Well, well, well…something had been cooking and Joan was just perturbed. Fortunately, her hubby, Zach was safe because he had shut down the lady.

I obviously instantly blocked her (from both mine and Zach´s pages).

#MCM Pregnancy is weird. My body is an oven right now. I’m hot ALL THE TIME. Especially when I’m sleeping. I’m always telling Zach to make sure no body part of his even thinks of coming next to me when I’m sleeping 😭 But when he’s away like he is this week, all I can think of is how we overheat the bed together and now I’m cold here alone and I want to cry 😭😭 but I’m not really cold but I want to feel hotter like the Zach kind of hot, you get? 😒 Urgh. Life. Pregnancy. Womanhood. 🤷🏽‍♀️

Yummy Mummy´s point basically is to caution women out there who might not have keen as eyes to spot something amiss, which they should match up to before it´s too late.

The devil is alive and well. SATAN IS DWELLING AMONGST US. And he may not be as far as you think.

Joan adds that it is pretty unfortunate that those who you think are cheering you on, are actually lionesses just waiting to pounce when the time is right.

Not everyone who claims to be in your corner really is. That´s the reality of the world we live in right now. 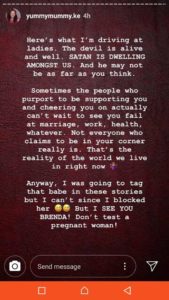 She calls her out by the name ¨Brenda, I see you! Don´t test a pregnant woman!¨

Apparently my baby is the size of a cabbage now. A whole cabbage. A whole damn cabbage. Don’t mess with me y’all. Im walking around with an actual leafy vegetable in me. #29weekspregnant