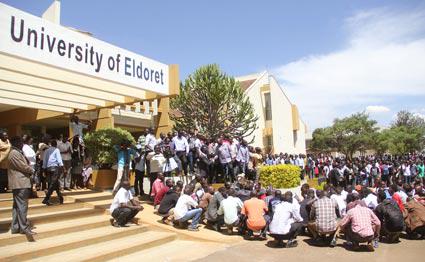 A couple of tertiary institutions have introduced restrictions on the manner which students are supposed to dress. University of Eldoret have proved how serious the issue is by turning away numerous students who allegedly wore inappropriately to school.

The Dean of Students at the University of Eldoret, Lelei Kiboiy; issued a memo reminding students to observe the university dress code as outlined in the Rules and Regulations Governing the Conduct and Discipline of Students

Some of the students were caught by surprise as they did not expect the rules on new dress code to be implemented so fast.

Some students claimed that they were aware of the rules but they had no money to buy new clothes.

Other students supported the implementation of the new rules saying that they need to dress appropriately inorder to be addressed with respect.

Like most people supported my dress my choice way back in the day, the same should be upheld as people have different preferences when it comes to dress codes.
The consequence of restricting youngins from dressing in their own way might reduce the number of intakes in the affected Universities, eventually leading to a reduction in the number of graduates. Anyway, Universities should focus more on studies rather than mere dress codes.