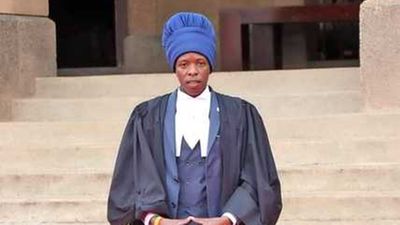 It’s an interesting time to be alive in Kenya.

In this decade, the corridors of justice has undergone a lot of revolution, with much credit going to the former CJ Willy Mutunga. He had shattered a lot of myths relating to the hallowed profession. He had rocked an ear stud, and traditionalists had an uproar about it.

Willy Mutunga had done away with austere, funereal dress and stuffy colonial wigs. He was outspoken on social issues like marriage, religion and lots more.

Perhaps, this man owes a lot to the unspoken feats of the former Chief Justice.

Mukundi Mathenge wouldn’t otherwise make news by getting admitted to the bar, but he has the distinctive honor of being Kenya’s first ever Rastafarian lawyer. This lawyer follows the Rastafarian faith, and practices the Bobo Shanti doctrine.

This is a huge win globally for the often stigmatized sect, and this achievement is a huge step towards social acceptance and education for this minority group. In Kenya, lots of people are closet Rastafarians. The sect’s chosen outlook of wearing long hair in natural braids – Rasta – has often been abused on the beauty scene.

Locally, this stigma was brought to the limelight in 2019 when Makena Ndinda, a student in form one at Olympic High School was expelled. Her crime was rocking dreadlocks and practicing the Rastafarian religion – unrecognized by the school’s constitution. It took a bit of social activism and the matter was heard by the High Court. Justice Onyancha had to direct Olympic High School to re-admit the student.

Lawyer Mukundi obtained a law degree at Kenyatta University in 2017, and joined Kenya School of Law for a post graduate diploma in law. He then did pupillage with Kenya Law in 2019.

While the lawyer admits a constant battle with stigma to ascertain his identity from an early age, he says none of it has gone into his head. He has an ambition to represent all and sundry despite their religion. He places more emphasis on minority groups facing discrimination and human rights groups.

This lawyer will have to contend with cases that shines the spotlight on his own faith. For example, the issue of bhang being illegal in the law, but is a pillar in his religion. How does he fight for a client who’s accused of consuming weed?

What’s certain is that he greatly adds value to the movement seeking to legalize weed in Kenya.