Vanessa Mdee has proved that love is a beautiful thing with Rotimi. Although it is in good faith, there is a problem. The beauty queen has had the best opportunity in her music career to go international.

Imagine you are the one dating power star, Rotimi? Would you have taken advantage of the large following he has? First, Vanessa Mdee is a brand on her own, a brand that she has the best opportunity to grow. 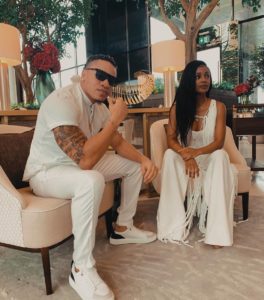 In my honest opinion, it is high time that Mdee opened her eyes and stop being fooled by love. I mean she is all over Instagram parading Rotimi.

Rotimi is is a brand and a big icon in the US. He is a name that will greatly push Vanessa Mdee’s music abroad. Who in this time an era keeps their fruits in one basket.

Honestly, I feel that Vanessa Mdee is losing as an artiste. Look at her fellow artistes like Tanasha who have taken advantage of their lovers’ popularity. It is a world that one will not feed on love but on your hustle. Every now and then, Vanessa Mdee has forgotten of her music career. Imagine being on a flight weekly with your celebrity lover?

Vanessa Mdee should by now have done a collaboration with Rotimi. Look at the market she will be attracting abroad? Sometimes I wonder if she ever thinks of going beyond the love word with Rotimi. I know m, majority of you will say am jealous, but it is time Vanessa came back to her senses. She has on a couple of times accompanied her star lover to perform abroad but not at one time has she performed alongside him.

In addition, I have not seen any dumb Tanzania artiste. Vanessa Mdee will be the first one and she needs to act fast. You’ll agree with me that she is committing music suicide. When is the last time she even released a single since dating Rotimi?

I hope she will read this and act accordingly. Your thoughts also count. She needs to stop going to live radios to parade her lover and start marketing her music.