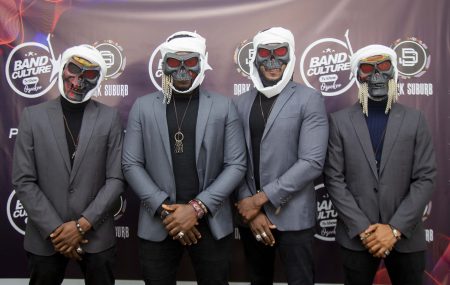 Speaking at the launch of the event at the forecourt of Awake TV in Accra earlier today, the lead singer

of Dark Suburb, Kankan Bizin said the reality show will seek to groom and promote talents from the

“There are a lot of people in the slum that will go far when given the opportunity.

We want to give opportunity to those who would love to be musicians.

We are not focusing on just musicians but a team of instrumentalists who will exhibit their talent.

“We thought if the show should be about an individual musician, it will not help. In the past, bands were everywhere but they are not enough in the industry currently. That is why we would like to bring back live band. The show will also give job opportunity to people in the suburb areas hence the need for them to be in a band,” he said.
Kankan Bizin also explained that, the reality show will go a long way to project live band to the international frontiers and also promote tourism in the country.
“I believe the reality show will affect the environment and tourism as well. Talking about it affecting tourism, we have a dream of introducing a festival in Ghana called the Festival of Bands but we can’t do it all alone that’s why we’ve come up with this reality show to build other bands. “We are still learning musically but the more we learn, the more we know. We are preaching the need to add our culture to music and that’s why there’s the need to promote bands in Ghana,” he stated.
Awake TV’s Head of Marketing, Stacy Opare has assured them the station’s full support and is willing to work as a team in bringing the show to a success.

“When they brought the idea, we thought it was a solid one. Everybody loves music as we are giving them our support to help them bring the youth from the slums unto a certain platform that will help nurture and grow their talents. “We are happy this is here and we are willing to give them the support. I’m a music lover so anything concerning music, I’m up for it. We will give them the traditional media and social media presence. We will give them the platform to show the world what people in the suburb communities can also bring to the table,” she said.
The team has promised to provide good technical judges and also assure the competition will be professionally standardize “From Kuami Eugene To Kelvin Boy, I Don’t See Any Artiste In Ghana As Threat To My Career” – Elkiddo