Fantana And Epixode Throw Shades At Each Other 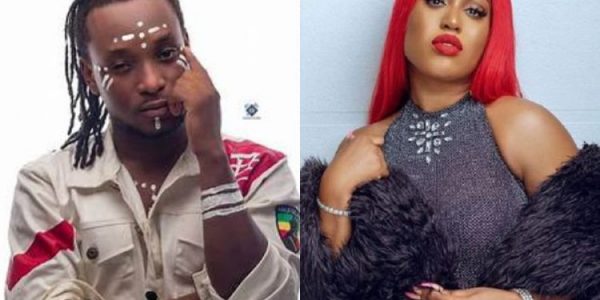 Celebrities beefing against themselves has become a common trend. It is not known yet whether all of them do it for the hype, or some just cant hold their tongue.

And this is the ‘ish between upcoming artiste Fantana and Dancehall artiste Epixode.

Ghanaian Dancehall artiste Epixode is of the view that Bullet’s Ruff Town records Fantana is hyping her  menstruation saga just to trend.

Last weekend, Shatta Wale’s Reign Concert saw Fantana show of her ‘sanitary towel’. Fans and Ghanaians expressed their disapproval on celebrities showing presumed panties at events. Fantana however defended herself in a press conference stating the circumstance as unfortunate, as her menstrual flow showed up unexpectedly.

Sharing his thoughts on the above circumstance, the Avatar singer Epixode said Fantana just wants to trend with the above development.

According to him, he doesn’t even know her and only got to know of her through the menstruation saga.

“Truth be told, I don’t know who the artist is. I had to find out yesterday when I was listening to you. I don’t know Fantana,” he said during the interview with Sammy Flex.

Fantana hasn’t taken the assumptions of Epixode lightly as she has thrown shades at him for his unpleasant comments.

In an Instagram story sighted, the “So what” singer poised that she has achieved in four months what Epixode hasn’t accomplished in four years.

@epixodemusic what you’ve been trying to do in 4 years, I’ve done in 4 months #AhMiDhat RUFFTOWN RECORDS TO THE WORLD.

As an add on, during the press conference Fantana said that  every woman should resist being discriminated against because of menstruation.

“I hope some people read wide and learn about menstrual health to stop the stereotype against young girls and women,” she said.”

However, Many industry players have condemned her actions and have rebuked her to check her dressing and also work on her stage delivery.

The hope still stands that artistes and celebrities settle beefs and all live in harmony to promote good image.

Sarkodie, and his family returns home after successfully ending their 14 days of mandatory quarantine